Perhaps the most exciting day ever experienced in Colorado Springs was Saturday, October 1, 1898. On that day, fire destroyed the Rio Grande Railroad freight station, about seventy buildings, including three lumberyards, and the original, or first, Antlers Hotel. 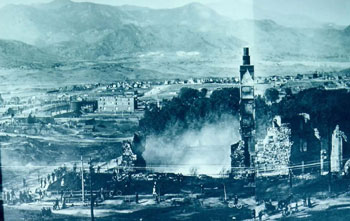 About 2:25 P.M. on October 1, fire was reported under the south platform of the D. &R.G. Railroad freight station. The platform was about four feet high, badly battered from much use and broken by wagons backing into it. Under it was an accumulation of trash and tumble weeds, ready to flare into flame from the smallest spark. On an ordinary day, such a trash fire could have been quickly controlled, but this was no ordinary day. The Colorado College recorded that the wind blew forty-seven miles per hour that day.

Among the freight cars was a carload of dynamite and another of blasting powder. As the fire extended from the station to the freight car containing the powder, it was obvious that an explosion was inevitable. The crew of the afternoon train from Manitou Springs took their locomotive and pulled the car of dynamite out of reach of the fire, but it was just too hot for them to couple onto the car of powder. As the explosion was inevitable, the firemen withdrew a short distance to avoid casualties. A few minutes before 3 P.M., just half an hour after the initial alarm, the powder blew, throwing burning brands and boards high in the air where they were carried northeast by the wind. Flaming timbers and pieces of powder kegs were hurled into the air and fell among a group of about twenty small frame houses in the block south of Huerfano Street (now Colorado Avenue) between Sahwatcha and Sierra Madre. Brands also fell on the sheds of the Crissey and Fowler Lumber Company at the southwest corner of Sahwatch and Huerfano.

Almost immediately after the explosion, all of the buildings south of Huerfano between Sierra Madre and Sahwatch were ablaze. Next, the depot of the Colorado and Southern Railroad caught fire. At this point, the fire moved in two directions. It spread eastward burning one structure after another. The other front crossed Huerfano and moved east on the north side of the street, quickly involving the El Paso Lumber Company and the Newton Lumber Company.

The Antlers Hotel was the showplace of Colorado Springs. It opened for business June 1, 1883, and had cost $180,000. The hotel took its name from the many fine deer and elk trophies which Cholmondeley (pronounced Chumley) Thornton had sent General Palmer from Manitou Park, and the latter decided the new hotel lobby would be a good place to display them. An addition had been built in 1890, extending the Antlers south. 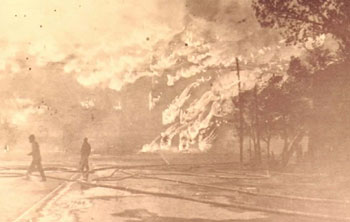 The tremendous heat generated by the burning pine of the lumberyard and fanned by the strong wind constituted an extreme threat to the hotel. About 3:30 P.M., as the fire approached the hotel, all guests were evacuated with as much luggage as possible. Then all furniture was carried out by volunteers. The hotel books were thrown into the large hotel safe. It was then closed and pushed out of the hotel doors and it tumbled down an embankment into the park where it was later buried in ashes.

Despite frantic efforts by many volunteers, the hotel grew hotter and at 4:07 P.M. the entire south side of the hotel burst into flames. When the hotel caught fire, many merchants feared the entire town would go up in flames and hired teams at exorbitant prices, to transport their business books and most valuable stock to a place of safety.

Throughout the night firemen stood by the fire with watch lines which they used to douse any fires that flared up. The wind rose again at 10 P.M. and embers and sparks were carried up to 100 yards. There was a brief threat of a rekindle. By midnight, the ruins of the Antlers were under control with some flames still showing at the north end.

The embers weren’t cool when the many sidewalk fire chiefs concluded that had a fire steamer been available, the Antlers might have been saved. There was evidence that many who were concerned with fire protection had recommended a steamer be purchased as early as 1880. One had not been purchased by 1898.

The fire department log listed the loss on buildings at $300,000 and contents at $150,000, for a total of $450,000, of which $350,000 was covered by insurance. The manager of the Antlers stated that the original building had cost $180,000, and the contents were worth at least $50,000. Donations were received from Colorado Springs business men and used to have handsome brass plaques engraved thanking the fire departments of Colorado City, Manitou Springs, Denver, ad Pueblo for their assistance.