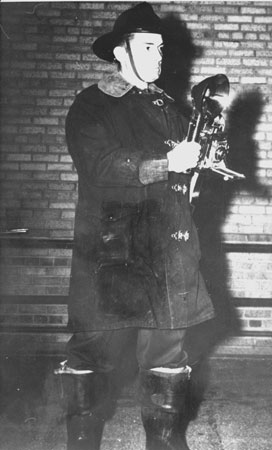 In 1942, Dr. Williams enlisted in the Medical Corps, U.S. Army Air Force. He became a flight surgeon and served in the Pacific Theater. He flew on many missions with the aircrews and was awarded the Bronze Star and Air Medal, among other decorations.

Following World War II, Dr. Williams and his wife, Alice, moved to Colorado Springs in 1946 and began his private practice, specializing in urology. He was a staff member at Penrose, Memorial, and St. Francis Hospitals. He became Chief of Staff at Memorial Hospital, President of the El Paso County Medical Society, and President of the Clinical Club.

Soon after his move to Colorado Springs, Dr. Williams became interested in the Colorado Springs Fire Department (CSFD). His interest was noticed by Chief Fred Lausch who submitted his name to City Council for appointment as Fire Department Physician. In 1953, the City Council passed a special ordinance to this effect with Dr. Williams being named to the position without pay or any designated responsibilities.

History of Firefighting in Colorado Springs

Dr. Williams took his affiliation with the Fire Department very seriously. He was concerned about firefighter safety and became a proponent for the use of self-contained breathing apparatus. He researched and wrote a paper entitled, “The Hazards of Smoke,” which he presented at the Memphis Fire Department Instructors’ Conference in 1959.

Over the years, Dr. Williams wrote numerous articles and papers related to the fire service. Among these were, “A History of the Volunteer Fire Department of Colorado Springs, 1873-1894”; “Horse-Drawn Days of the Fire Department, 1894-1917”, “The Cripple Creek Conflagration”, and “The Antler’s Conflagration of 1898”. As a culmination of his work, Dr. Williams published a book entitled, “Fighting Fire in Colorado Springs” in 1992.

Over the years, Dr. Williams amassed a large collection of fire fighting memorabilia. Much of it originated from the CSFDE and from family members of those who had served in the Department. This collection was donated to and is presently in the possession of the CFSD.